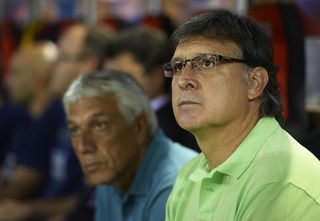 The champions travel to Madrid on Saturday with 12 points from their four La Liga matches this season - plus a 4-0 win over Ajax in their UEFA Champions League opener - and will face a side that has conceded 12 goals in their previous three games.

Barcelona have scored a dozen goals in their last two visits to the Estadio de Vallecas Teresa Rivero - winning 5-0 last term and 7-0 in 2011-12 - and have not lost to Paco Jemez's men since December 2002.

Real Madrid go into their fixture at home to Getafe on Sunday two points adrift of their rivals after being held to an entertaining 2-2 draw at Villarreal last time out.

However, they will be high on confidence after following that result up with a resounding 6-1 win at Galatasaray in the Champions League on Tuesday.

Cristiano Ronaldo scored four goals over the course of those two matches, while Gareth Bale got his Real career off to a flying start by scoring on his debut at El Madrigal.

Getafe may have beaten their more illustrious city neighbours at home in August last year, but they have conceded four times in each of their last three visits to the Bernabeu.

The only other side who can match Barcelona's perfect start thus far is Diego Simeone's Atletico Madrid.

Wins against Sevilla, Rayo, Real Sociedad and Almeria have seen them take maximum points from their four games, while they also got their European campaign off to a flyer by beating Zenit St Petersburg 3-1 in the Champions League on Wednesday.

Striker Diego Costa has netted four goals in his last four outings, and Atletico will head to Real Valladolid on Saturday confident of another victory having won the last four meetings between the sides.

Elsewhere, newly promoted Villarreal travel to Celta Vigo in joint second place with Real Madrid with 10 points from their opening fixtures, while Valencia host Sevilla in a match where both sides have points to prove.

Valencia have managed only one win thus far and were comfortably beaten by Sevilla's city rivals Real Betis last time out, while their visitors are still looking for a first victory of the season.

Real Sociedad will be back in domestic action after a Champions League reality check in which they were defeated 2-0 at home by Shakhtar Donetsk. Their latest visitors will be Malaga, who thrashed Rayo 5-0 last time out.

Meanwhile, Andalucian duo Betis and Granada face each other at the Estadio Benito Villamarin, and Monday's game sees Athletic Bilbao travel to Espanyol.