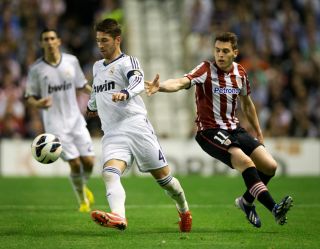 Both sides have won their first two matches of the 2013-14 campaign, with new Real manager Carlo Ancelotti overseeing triumphs against Real Betis and Granada.

Frenchman Karim Benzema has netted in both of those victories, while Portuguese star Cristiano Ronaldo has not scored this season amid reports linking him with a return to Manchester United.

Ronaldo's failure to score on the last day of the 2012-13 season means that he has played three successive league fixtures for Real without finding the net.

The last time Ronaldo did not score for three successive La Liga games came back in February 2011, but he duly responded with a hat-trick against Malaga, posing an ominous warning for Athletic.

The move is likely to be sealed before the English transfer window closes on September 2, though.

Athletic have also started well, winning 2-1 at Real Valladolid before posting a 2-0 home success against Osasuna.

While they lost experienced pair Fernando Llorente and Fernando Amorebieta in the close-season, manager Ernesto Valverde added the likes of Benat Etxebarria, Kike Sola and Mikel Rico to their squad.

Whether midfielder Ander Herrera features is sure to be a talking point, with Athletic revealing on Friday that they had rejected a €30million bid for their star man.

The offer is widely reported to have come from Manchester United, who have seen attempts to sign fellow midfielders Cesc Fabregas, Marouane Fellaini and Thiago Alcantara fail to come to fruition.

Athletic president Josu Urrutia said on Friday: "There is an offer for Ander Herrera. For a player to go first the player has to express his desire to leave the club.

"Herrera has not told us he wants to go, and we have said we do not negotiate for our players."

The 24-year-old playmaker joined Athletic from Real Zaragoza in 2011.

Xabi Alonso (foot) is sidelined until the end of November and his absence will hurt Real, but they will take confidence from their impressive record in recent years against Athletic.

Of the last 16 La Liga encounters between the two sides, Real have won 15 of them, with Athletic's sole triumph coming in January 2010 when Fernando Llorente headed the winner.

In those matches, Real have scored 51 goals and conceded just 12 in the process.