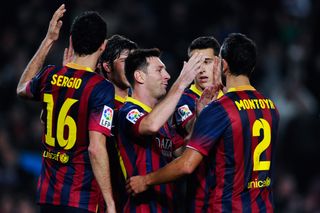 Barcelona, Atletico Madrid and Real Madrid will enter round 22 of the season with a point between them and, while enough time will remain to rectify any slip-ups this weekend, their three fixtures have the look of season-defining matches.

On Saturday, league leaders Barcelona (54 points, plus 44 goal difference) will host Valencia, while on Sunday, Atletico (54, plus 38) will welcome Real Sociedad to the Spanish capital and Real (53, plus 39) will travel to take on Athletic Bilbao.

Valencia have been uncharacteristically poor this season and sit 10th heading into Saturday's clash with Barcelona, 29 points adrift of the Catalans.

But with the likes of Jonas, Ever Banega and Sofiane Feghouli, Valencia still have the kind of players who could shock Barcelona with a bit of luck.

History is against Valencia, as they have not beaten Barcelona in 14 meetings in all competitions, but head coach Pizzi will surely remind his players that their club have regularly challenged the likes of Barca and Real over the past decade in the hope they can step up on Saturday.

Sociedad will arrive at Atletico's Estadio Vicente Calderon in sixth spot in La Liga and on the back of a 4-0 thrashing of Elche.

The Basque club have only lost once in their past 10 competitive outings and with French striker Antoine Griezmann in third position in La Liga's scoring charts after a brace against Elche, Sociedad will pose a significant threat to Atletico.

If both Barcelona and Atletico fail to win this weekend, Real could move top of the Spanish first division for just the second time this season and the first time at the end of a full round.

But Carlo Ancelotti's men will need to overcome a tenacious Bilbao side if they are to make the most of any potential slip-ups by their title rivals.

Bilbao have yet to lose at home this season in all competitions and managed to beat Barcelona in December at San Mames, however, Real have won their past eight fixtures against the Basque club.

Granada and Celta de Vigo will begin the round on Friday, while Villarreal and Osasuna will wrap it up on Monday.