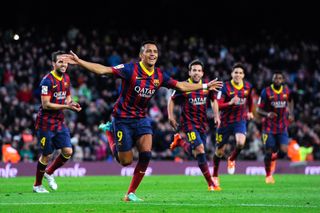 Chile international Alexis Sanchez was the star of the show for Gerardo Martino's side as the defending champions began a third consecutive calendar year with a 4-0 win.

Pedro got his name on the scoresheet to complete the rout and give Barca a 16th league win of the campaign to draw level on points Atletico, with the two teams set to face each other next Saturday.

Sevilla moved into the top six with a 3-0 win over Getafe as Unai Emery's team extended their unbeaten league run to six games.

Vitolo put the hosts ahead in the 34th minute after good work by Carlos Bacca and the Colombian striker then netted his ninth goal of the season 10 minutes after the break.

Croatian playmaker Ivan Rakitic sealed the win with a 77th-minute strike that compounded Getafe to a third consecutive Liga defeat.

Antoine Griezmann's 12th league goal of the season set Real Sociedad on their way to a 2-0 victory in the Basque derby against Athletic Bilbao.

The Frenchman struck just before the break in San Sebastian with an effort from the edge of the penalty area that Bilbao goalkeeper Gorka Iraizoz was unable to keep out, although his view was blocked by Carlos Vela.

The visitors laid siege on the Sociedad goal in the second half, but could not find an equaliser and Ruben Pardo sealed the points with a 93rd-minute strike to make it four wins on the spin.

In Sunday's remaining game, Osasuna climbed out of the bottom three thanks to a first win in four matches as Alvaro Cejudo's first goal of the season saw them record a 1-0 win over Espanyol.