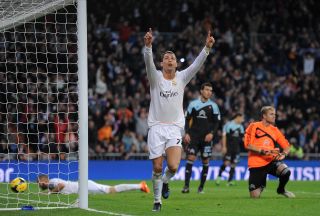 The Portugal forward took his tally to 20 league goals this season with a second-half double as Gareth Bale made a substitute appearance following his calf injury.

Ronaldo then took centre stage, scoring from close range eight minutes from time, with Bale setting up the third in stoppage time.

The result keeps Real within five points of leading duo Barcelona and Atletico Madrid, who both won at the weekend.

The visitors climbed to sixth with their first win in four league matches, while Paco's relegation-threatened side are winless in five La Liga outings.

Uche, who now has nine goals this season, set the tone with the opener after 10 minutes, with Jeremy Perbet adding two more before the interval.

Two further strikes in six second-half minutes from Uche took the game beyond the hosts' reach, although Nery Castillo's brace, including one from the penalty spot, did restore some pride.