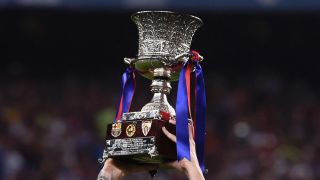 La Liga president Javier Tebas has confirmed that the Supercopa de Espana between Barcelona and Sevilla could be a one-off game.

The game - played between the winners of La Liga and the Copa del Rey - has historically been played over two games in August.

Because Sevilla - who were thumped 5-0 in last season's Copa del Rey final by Barca - will play Europa League qualifiers in August, La Liga are open to playing a single game, reducing the impact on both sides' early league fixtures.

"My opinion is that there is a calendar, with the dates of August 5 and 12 in which there could be a one-off game which wouldn't require any changes to the first matchday of the league or to postpone Sevilla and Barcelona's games until December," said Tebas.