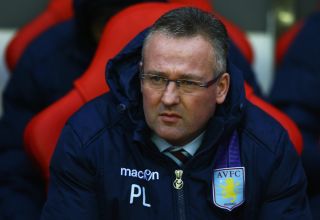 The famous competition represents Villa's only realistic chance of winning a trophy this season and not since 1957 have the midlands club lifted the FA Cup.

Villa have won the competition seven times, but Lambert's priority is to ensure his side stay in the top flight ahead of Saturday's third-round clash with League One outfit Sheffield United.

He said: "It's not just become about money, because everyone wants to try and win something.

"I think success is important for your own career and if you're a footballer you want to try and win things, but from a football club business point of view everybody knows the Premier League is the one everyone wants to get into and stay in because of the finances."

When asked if he could do without the FA Cup, Lambert said: "I think if you ask the majority of them (other Premier League managers),  if they're being honest I think they probably would do, yes.

"Survival in the league is vital, like ourselves we don't have a massive squad so the points are really important and if everybody was being honest they'd say the same.

"That's realistic, anybody who says different I'm not sure they'd be telling the truth. The Premier League is the most vital thing that anybody wants to get into and we're no different.

"The cup competitions you want to get through and we'll pick a team we think can get through, but your main one is the league."