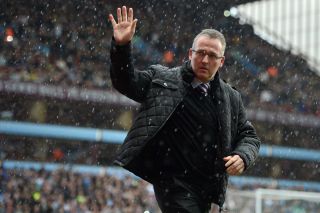 The Premier League side are 13th in the table after eight games, with three wins under their belt following a spell of matches that has seen them face a number of the top teams.

And with victories over 2011-12 champions Manchester City and current table-toppers Arsenal among those results, Lambert is impressed with how they have fared.

"The thing for us is that in our start to the season we've played five of the top six which is an incredible thing to come through," he said.

"You need a bit of respite at certain times from that. You can't keep going like that.

"The only one we haven't played yet is Manchester United so when you look at it like that, our points tally is pretty decent."

Villa host Everton on Saturday, and though Lambert knows it will be a tough tie, he is hopeful for a positive result.

"They've have got off to a great start but those players have been there for a long time under David (Moyes).

"They're ahead of us regarding the stability they've had for a number of years now.