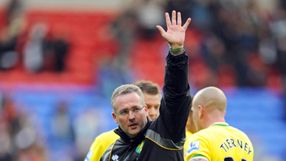 Lambert then told a news conference on Friday that he was being sued over his move to English Premier League rivals Villa.

"I'm extremely disappointed senior officials at Norwich have made comments in relation to myself," said Lambert. "I'll let him say what he has got to say and we'll see what happens.

"It will go before the Premier League managers' tribunal. The LMA [League Managers Association] are acting on my behalf - they supported me at the time and still are.

"It is disrespectful and wrong to that tribunal for me to comment any more. That's the way I'm going to leave it - my main concern is Aston Villa," Lambert added.

"What Norwich haven't made public is that they are suing me. Am I concerned Norwich fans are only hearing one side of the story? Yes."