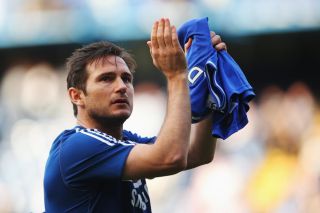 The 35-year-old sees his contract with the club expire in the close-season, having been named on Chelsea's released list along with Ashley Cole and Samuel Eto'o.

While a new deal is not out of the question for the England international, he has been linked with joining Harry Redknapp at QPR and also reportedly has options in the MLS.

However, if he were to retire after the upcoming FIFA World Cup, Lampard claims he would be ready to deal with that.

"I don't know if I'll be at Chelsea next season. I'd like to carry on for two or three more years but it would be good to end on a high," he told The Sun.

"So, if that means it all ends tomorrow, I wouldn't have any regrets.

"You know your shelf-life, so I started to mentally prepare when I hit 30.

"I've been doing this for a long time, so there's a part of me that's looking forward to the future."