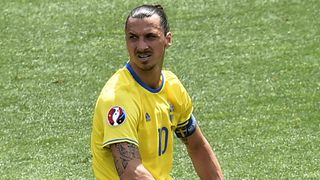 Zlatan Ibrahimovic has been tipped by team-mate Sebastian Larsson to "come up with something good" in Sweden's final Euro 2016 Group E match against Belgium on Wednesday.

Ibrahimovic, widely considered as one of Europe's most prolific strikers, is yet to open his goalscoring account at the European Championship in France, with Sweden taking just a point from their opening two fixtures with Northern Ireland and Italy.

The 34-year-old free agent, who has been heavily linked with a move to Manchester United, fired a blank in Sweden's late 1-0 loss to Italy last time out.

But Larsson is confident Ibrahimovic will produce the goods against the star-studded Belgians as Sweden attempt to keep their qualification hopes alive at the Stade de Nice.

"You know what he brings to the team," Larsson told reporters.

"He's our main guy that's scored more goals than anyone else for Sweden.

"So let's wait and see. I'm sure he's going to come up with something good on Wednesday [against Belgium]."

Fellow Swedes Oscar Hiljemark and Marcus Berg also talked up Ibrahimovic ahead of Wednesday's showdown, though the former insisted the team have to help their skipper.

"Of course Zlatan is a world class player and he's on top of the world, and has been for the last 10 years. Of course it's an advantage for us, but we have to use him in the right way and get him involved in the game in a positive way," Hiljemark said.

"It's not just about kicking the ball up to him and hoping for the best. We have to create the spaces and the possibilities for him to do what he's best at."

Berg added: "He [Ibrahimovic] knows what to do. He helps the team a lot with goals and with his fighting spirit and his winning mentality. Also the team have to help him a lot."