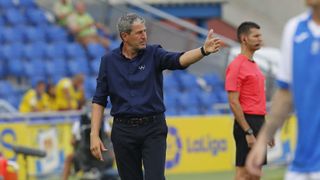 Las Palmas are on the hunt for a new head coach after Manolo Marquez's shock resignation just six games into the La Liga season.

Marquez made the step up from Las Palmas B, whom he guided into the Segunda B last term, to replace Quique Setien in the senior team.

Impressive victories at Malaga and at home against Athletic Bilbao had the Canary Island side off to a solid start, but Marquez has handed in his notice following Sunday's 2-0 defeat to Leganes at the Estadio de Gran Canaria.

Their first task in tandem is a daunting one, with a trip to Camp Nou to take on a flawless Barcelona coming on Sunday.