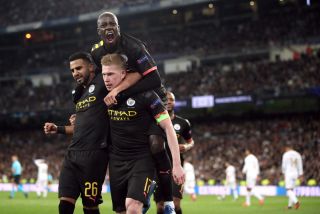 Manchester City struck twice late on to claim a stunning comeback victory over Real Madrid in the Champions League on Wednesday.

Gabriel Jesus and Kevin De Bruyne, the latter from the penalty spot, netted in the final 12 minutes as City beat the Spanish giants 2-1 on a famous night at the Bernabeu Stadium.

The result put City, who are banned from the competition for the next two years, in sight of a place in the quarter-finals. The second leg of the last-16 tie is at the Etihad Stadium in three weeks.

City have a big fight to come as they appeal against their expulsion over Financial Fair Play breaches but, for now, this was something to savour.

“I’m happy for the victory, of course, and the performance as well,” said boss Pep Guardiola, who as a former Barcelona captain and manager had even greater reason to celebrate.

“But it is still not over. If there is one team in the world that can overcome anything it is this club.

“Hopefully we can do a good performance and go through. We have not won anything yet but to win here is a big satisfaction.”

Guardiola had sprung a surprise by naming fit-again Raheem Sterling and top scorer Sergio Aguero on the bench and playing striker Jesus on the left wing, but his plan worked brilliantly.

The first half was tame but City were on top when Isco gave Real a 60th-minute lead. City’s response was emphatic with De Bruyne crossing for Jesus to equalise and then tucking away from the spot after a foul on substitute Sterling.

That was only City’s third successful penalty in their last eight attempts.

“I say thank you to Kevin for taking a penalty under pressure,” said Guardiola. “Finally, after losing four penalties in a row, it is good for us.”

Matters got worse for 13-times winners Real as captain Sergio Ramos – for the 26th time for the club – was sent off for denying Jesus as goalscoring opportunity.

Manager Zinedine Zidane said: “We didn’t deserve it but this is football. We needed 90 minutes of total concentration, especially against a team like City.

“But we know that there’s half this tie left and now it’s simple – we have to go to City and win.”