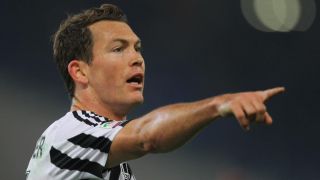 Former Lazio star Stephan Lichtsteiner scored the winner as Juventus progressed to the Coppa Italia semi-finals with a 1-0 win at the Stadio Olimpico on Wednesday.

Lichtsteiner's second-half goal sealed an 11th-straight win in domestic competitions for the holders, who overcame Lazio in last season's Coppa final to seal a domestic double.

Balde Keita missed a terrific early chance for Lazio, shooting over the crossbar from close range and Simone Zaza should have put Juventus in front shortly after the break but found the side netting after strike partner Alvaro Morata had forced a save from Etrit Berisha.

Juventus took the lead on 65 minutes when Zaza's shot came back off the post and Berisha thought he had saved Lichtsteiner's effort on the rebound, but the ball was just over the line. Inter await Juve in a blockbuster semi-final after they defeated Napoli on Tuesday.

Juve wing-back Lichtsteiner had the game's first effort on six minutes, but his long range strike was straight at Berisha.

The hosts should have been ahead after 12 minutes. Senad Lulic's pass freed Keita down the left but after advancing on goal he hit his shot well over the target from just eight yards.

Paul Pogba then crashed a header over the bar before Berisha denied Zaza at his near post.

Juve, on a run of 10 Serie A wins in succession, were pressing hard for the breakthrough and Berisha dived low to his left to keep out a fierce drive from Pogba on the half-hour mark.

Allegri's men then wasted a glorious chance to open the scoring on 51 minutes.

Zaza and Morata combined beautifully and when Berisha saved from the Spaniard, Zaza should have converted the rebound but somehow hit the side netting from four yards.

But Juve eventually did take the lead on 65 minutes. Zaza's curling effort beat Berisha but rebounded off the post to Lichtsteiner, whose low shot crept over the line despite the goalkeeper's efforts.

Juve should have sealed their last-four place when Stefano Sturaro raced clear, but the midfielder dragged his shot wide.

Lazio struggled to create clear openings against a resilient Juve defence and the Serie A champions closed out a comfortable victory.