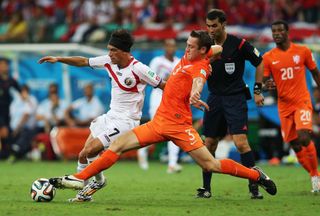 The 22-year-old joins the Serie A outfit on a five-year deal after passing a medical in Rome.

De Vrij impressed at the recent World Cup as Netherlands made it to the semi-finals, before bowing out at the hands of Argentina.

He started each of his country's seven matches in Brazil and already boasts 19 international caps.

A central defender who came through the youth system at Feyenoord, De Vrij made his senior debut in December 2009 and soon became a regular, making 135 league appearances.

And he admits it was not an easy decision to leave De Kuip.

"I have taken my time in choosing Lazio," he told Feyenoord's official website.

"It is a well-considered decision that has come after lots of talks with the management of the club, who made a good impression on me.

"That has been confirmed over the past few days when wrapping up the transfer. Lazio really showed they wanted me and I'm delighted to take this step.

"I hope to become an even more complete defender in Italy. I will be playing against world-class strikers there, which is a great challenge.

"This step brings a long period at Feyenoord to an end, which is obviously something I think about.

"I'm proud to have been part of such a big club with fabulous supporters for so long. I can look back on a fantastic time at Feyenoord."