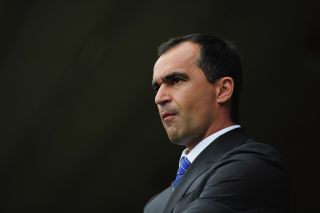 The 25-year-old, who only entered the game in the 95th minute, managed to prevent a nervy shoot-out for the hosts on Wednesday after they failed to put the game to bed in normal time, despite numerous opportunities.

The Premier League side saw their opponents, who have never played a League Cup tie away from home, go ahead through Luke Freeman but Barcelona loanee Gerard Deulofeu grabbed an equaliser just before the break.

But the wasted opportunities, many of which fell to Arouna Kone who made his first competitive start for the club, left the sides having to decide the encounter in extra time, when the Belgian struck.

After early pressure from the hosts, Kone should have given his side the advantage as Deulofeu got to the byeline and cut the ball back, but the Ivorian could not beat Stevenage defenders, who had got back to defend the goal line.

Despite Everton's dominance, it was Stevenage who took the lead when Freeman found the back of the net against the run of play in the 36th minute after some impressive build-up play from his team-mates.

Freeman fired home after a clever pass from Jimmy Smith, who found the former Arsenal man with a neat pass into the area, as the ball sat up for a shot.

And though the home crowd saw more disappointment when Kone skied over minutes before the break, Deulofeu was on hand to claw it back immediately before the whistle.

The Spain Under-21 international kept his calm to glide past the Stevenage defenders and curl a neat left-footed shot across goalkeeper Chris Day.

The youngster came out for the second half with the same vigour, knocking a perfect ball into Steven Naismith with the 26-year-old just unable to turn it in.

His efforts typified a renewed attack from the home side, who heaped pressure on their opponents seeing Leon Osman’s powerful shot blocked by Doughty in the 58th minute.

Deulofeu remained the star of the show, and he came close to hitting the winner in the 71st minute when his effort from outside the box was blocked by Jon Ashton.

In an otherwise lacklustre end to the 90 minutes, Stevenage substitute Greg Tansey went close to a stunning winner, but Robles tipped his long-ranger over as the game entered extra-time.

Martinez opted to bring midfielder Marouane Fellaini into the mix in Barkley’s place, but it was Kone who had the best chance of the first period, but the Ivory Coast international dithered on the ball after Deulofeu’s precise centre.

However, Stevenage could not keep the Belgium international out, and he made no mistake, firing home just yards from the goal to clinch the tie.