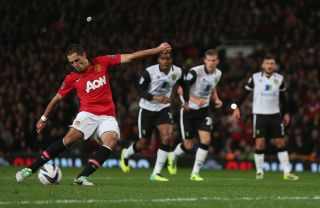 After opening the scoring from the spot after 20 minutes following a Leroy Fer foul on Adnan Januzaj, the 25-year-old reacted quickly to a Mark Bunn parry to double the hosts’ advantage with a header early in the second half.

Phil Jones made sure of the victory with a late volley, before Fabio prodded home a fourth in stoppage time in a game marred by a serious-looking head injury to Norwich's Robert Snodgrass.

The victory is United’s first over Norwich in the League Cup, and Hernandez has now scored in each of his last three appearances in the competition.

David Moyes made wholesale changes from the United side that came from behind twice to beat Stoke City 3-2 on Saturday, with Phil Jones and Tom Cleverley the only survivors.

Wilfried Zaha was given a first start since August’s Community Shield win over Wigan Athletic, while Nemanja Vidic and Rio Ferdinand were also among those to come in.

Norwich were similarly unrecognisable from the weekend, with Fer, Bassong and Snodgrass the only players to line up at Old Trafford who started Saturday’s goalless draw with Cardiff City.

Nathan Redmond was the first to get a sight of goal for the visitors, creating the angle for himself at the edge of the penalty area before drilling wide of the left-hand post after 10 minutes.

At the other end, Hernandez twice went close to giving United the lead in quick succession, but it wasn’t long before the Mexican broke the deadlock.

Norwich’s Fer, who has been under the spotlight since a display of unsporting behaviour in the Premier League clash with Cardiff, attracted more unwanted attention in the 19th minute as he left a lazy leg in the path of Januzaj inside the box to concede a penalty.

Hernandez stepped up and duly dispatched the spot-kick into the bottom left-hand corner of Mark Bunn’s net, sending the goalkeeper the wrong way to put United ahead.

Five minutes into the second half, Johan Elmander outmuscled Vidic to nudge the ball narrowly wide of the right-hand post from a Redmond cross as Norwich went in search of an equaliser.

But moments later, the hosts were two up. Hernandez got his head to an Alexander Buttner cross from the left to force a parry from Bunn, but the striker was alert and nodded the ball into the back of the net at the second attempt for his third goal of the competition.

Snodgrass drew a save from Anders Lindegaard in the 56th minute with a header, but picked up a head injury in the process, resulting in a nine-minute stoppage before he was replaced by Anthony Pilkington.

Things went from bad to worse for Norwich as Redmond was forced from the field with an apparent muscle injury, before Jones put the result beyond doubt in the 86th minute with a volley from a poor headed clearance by Bassong.

And full-back Fabio then tapped home a fourth, four minutes into 11 of injury time, following a wonderful pass from substitute Wayne Rooney.