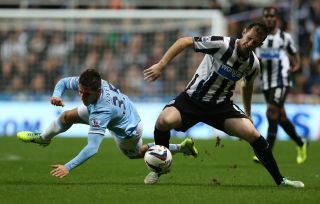 Newcastle will feel hard done by after taking the match to Manuel Pellegrini's side, but they failed to find a breakthrough and were left to rue goals from Negredo and Dzeko that put City into the quarter-finals.

Alan Pardew's men created the best chances of the first half and the home team thought they had the lead through a close-range Shola Ameobi effort, but he was adjudged to be offside.

City – who last won the competition in 1976 - improved after half-time with former Newcastle man James Milner coming closest with a long-range curler. Papiss Cisse wasted a great chance to put Newcastle ahead in extra time when he volleyed straight at Costel Pantilimon.

And Newcastle were duly punished by Negredo's side-footed effort from Dzeko's low centre, before the Bosnia-Herzegovina international added gloss to the scoreline when he finished Milner's sublime pass.

Both teams took the opportunity to rotate their squads, Ameobi made a rare start for Newcastle, while Pantilimon replaced under-fire goalkeeper Joe Hart for City.

In a lacklustre opening, Newcastle came closest to opening the scoring when Ameobi flicked on Tim Krul's long pass and Cisse lofted his effort over the goalkeeper and just wide of the post.

Some stout defending gave Newcastle a solid base and they were nearly rewarded on the half-hour mark when Ameobi's half-volley forced Pantilimon into a smart one-handed save.

Pardew's side thought they had taken the lead with the next attack when Ameobi tapped home Cisse's centre but his celebrations were curtailed by the offside flag.

After struggling to make an impact in the first half, City came out with more intent after the break and nearly went ahead when Jesus Navas dispossessed Krul and laid back to Milner, who curled his 25-yard effort at the open goal just wide.

City were now in the ascendancy and Negredo wasted a golden opportunity to grab the winner. The Spain international received Dzeko's lay-off in the area, but took too many touches before chipping tamely at Krul.

That would prove the best opportunity of the closing stages as the match headed for extra time.

Newcastle made a fast-paced start after the restart and Cisse missed his side's clearest chance of the game when he sprung the offside trap only to shoot straight at Pantilimon.

That miss would prove costly as City edged ahead in the ninth minute of extra time.

Dzeko broke down the left and crossed low for Negredo to calmly slot past Krul.

And, in the 105th minute, the game was put beyond doubt. Milner drove at the Newcastle defence and played a superb pass with the outside of his foot to Dzeko, who rounded Krul and slotted into the empty net.

Newcastle almost grabbed a consolation when Joleon Lescott cleared Hatem Ben Arfa's driven effort off the line as City booked their place in the last eight.