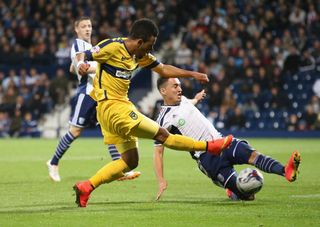 Jason Davidson was West Brom's shootout hero, scoring the decisive penalty to give Alan Irvine's side a 7-6 win on spot-kicks after the two sides were locked at 1-1 after 120 minutes.

Oxford entered the second-round clash at the bottom of League Two, with 80 places separating them and their Premier League opponents in the football pyramid.

And with no goals coming in the additional 30 minutes, penalties were required to decide the contest, despite Oxford having Junior Brown sent off for a second bookable offence late on.

Oxford goalkeeper Max Crocombe made two early penalty saves but Michael Appleton – a former West Brom player and caretaker manager – saw his side miss their chance to win it.

And after West Brom keeper Boaz Myhill dived to his left to deny Oxford captain Jake Wright, Australia defender Davidson stepped up to give the hosts a nervy win.

Crocombe was called into action as early as the third minute, denying Chris Brunt from point-blank range, while Joe Riley produced a superb last-ditch challenge to keep out Saido Berahino.

West Brom's superiority was glaringly obvious and they finally opened the scoring in the 29th minute as Mullins turned a cross from Liverpool loanee Andre Wisdom into his own net.

The hosts nearly scored again just before the break, but Wright slid in to stop Brown Ideye tapping in an easy finish.

Oxford were better in the second half, though, and they came close to levelling proceedings in the 66th minute.

Carlton Morris charged down the left and, after linking up well with Brown, the midfielder inexplicably dragged an effort well wide from inside the area.

Appleton introduced striker Will Hoskins with nine minutes to play as he made a return to competitive football following more than 18 months out with a knee injury.

And it proved to be an inspired change as the 28-year-old played a major role in the equaliser, cutting a well-placed pass back to Hylton, who bundled home from close range.

Oxford almost scored again in the 94th minute, as Myhill spilled Alex Jakubiak's cross, before Brown's subsequent effort was cleared off the line.

Oxford were reduced to 10 men with eight minutes of extra time remaining, as Brown fouled Craig Dawson and was given a second yellow card.

They were still able to force penalties, though, and Crocombe's saves from James Morrison and Ideye gave Appleton's men the edge.

But Michael Collins and Tom Newey were unable to convert from 12 yards, and after debutant Cristian Gamboa saw his effort sneak under Crocombe, Myhill gave West Brom the edge.

And his save from Wright proved crucial as Davidson kept his cool to send West Brom into the third round.