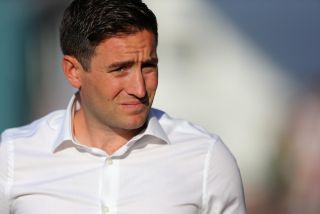 Lee Johnson's side hit the headlines this week when they came close to signing convicted rapist Ched Evans, although the move fell through amid pressure from external sources.

Goals from Jabo Ibehre and George Elokobi either side of the interval appeared set to put a difficult few days firmly behind Oldham, but Joseph Mills' sending off following a fracas proved pivotal.

Bristol City returned to the top of the table with a 4-0 thumping of struggling Notts County.

County came into the weekend without a league win in six matches and were comfortably brushed aside at Ashton Gate on Saturday.

Joe Bryan put the home side ahead in the eighth minute, before Matt Smith scored his ninth in five matches to double the advantage.

Jay Emmanuel-Thomas and Derrick Williams added further gloss to a comfortable triumph after the interval, with Steve Cotterill's men climbing back above Swindon Town, who do not play until Monday.

Third-placed MK Dons were fortunate to escape with a point from their 2-2 draw at Crawley Town, who played the majority of the match with striker Matt Harrold in goal.

Izale McLeod opened the scoring for Crawley from the spot in the 14th minute, before goalkeeper Brian Jensen was forced from the field with a suspected dislocated finger.

Harrold came off the bench in the absence of a reserve stopper, although Jensen took up a position behind the Crawley goal to advise his new protege.

McLeod netted a second three minutes into the second half to give the home side a much-needed cushion, but Harrold's hopes of an unlikely clean sheet were dashed when Will Grigg headed home 14 minutes from time.

At the other end of the table, Crewe Alexandra are out of bottom four for the first time since August following a 3-1 victory over Gillingham, Yeovil Town stay bottom after their 2-0 defeat at Barnsley, and Colchester United claimed an impressive 2-0 win at Peterborough United to boost their own survival chances.