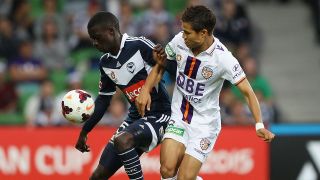 The game:
The obvious reaction to Melbourne Victory's past fortnight is to assume it could not get any worse but, while it seems unfathomable that the Big V will suffer another 5-0 thrashing, a third straight loss is not unrealistic, considering their poor record at nib Stadium. Victory have lost eight of 12 games in Perth and have only won once in their past four. Perth Glory have also been strong at home this season with just one loss in eight matches.

Melbourne's head coach Kevin Muscat has been forced into changing his back four yet again with Adrian Leijer suspended for the third time this season. Adama Traore will return from a one-match ban and Pablo Contreras is back from injury, while Dylan Murnane will drop out of Victory's line-up. Muscat has also indicated James Troisi and Kosta Barbarouses (foot) will not start with Tom Rogic and Gui Finkler set to take up the attacking midfield slots in the Big V's much-discussed 4-2-4 formation.

In a positive for Muscat and his men, Perth do not usually clog the midfield like Wellington and Sydney did over the past fortnight, with Kenny Lowe preferring a fairly traditional 4-3-3. But Glory have been quite adept at maintaining possession at home and with Shane Smeltz finding form will be ready to take advantage of any lax defending from Victory.

The big issue:
Glory - How will Lowe's new men settle? Perth have brought in three new players over the past couple of weeks with Nebojsa Marinkovic, Royston Griffiths and Darvydas Sernas all signing with the Glory until the end of next season. If they can make an immediate impact in purple shirts over the next month, they could ensure Perth make the A-League finals. Friday night's clash against a struggling Melbourne team would be a great start.

Victory - Can Rogic save Victory? Signed on loan from Celtic with much fanfare, Rogic's debut in the Big V shirt last week off the bench was very much overshadowed by Sydney FC's performance. While Victory have a myriad of problems on the pitch at the moment, the class of Rogic, his ability to keep the ball and create in the final third could make a significant difference. If not, Victory will be in serious trouble and the pressure will increase on their rookie coach.

The game breaker:
Shane Smeltz - The Kiwi striker had a horrid opening three months to the season, playing just four games as he struggled injuries to his hip and then ankle. Smeltz has seemingly turned the corner in 2014 though as he has played in Perth's last three matches, scoring three goals. The 32-year-old striker loves playing against Victory as well, having scored more goals (11) against the navy blue and whites than any other A-League club.

Prediction: Glory 1-1 Victory
The last meeting between these two sides spelled the end of Alastair Edwards' tenure as Perth's head coach after captain Jacob Burns had questioned why he was left on the bench as the manager decided to play his two sons - Ryan and Cameron - ahead of the 35-year-old skipper. Do not expect Lowe to forgo experience against Victory with Burns, Steven McGarry, William Gallas, Michael Thwaite and Smeltz all likely to start. Marinkovic, Griffiths and Sernas could all make an appearance as well, which would further boost the Glory's level of experience.

It remains to be seen how Victory will continue to cope with their 4-2-4 formation. Muscat has vowed to stick with the same formula and with captain Mark Milligan (knee) still on the sidelines, Perth will certainly have opportunities to attack a shaky back four if Melbourne's forward quartet do not press effectively.

The Glory have the fourth-best defensive record in the A-League this season but have conceded 11 of their 17 goals against this season, in six matches against the current top four teams. While Victory have not shown the type of form over the past fortnight that has put them in fourth position, they should have enough quality up front to breach Perth's back four and give themselves a chance of at least a draw.