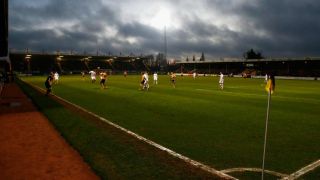 An FA Cup clash with Manchester United is looming large on the horizon for Cambridge United ahead of Saturday's visit of Newport County.

The mouth-watering fourth-round tie against the Premier League giants a week on Friday has been the talk of the city since the draw was made last Monday.

Last season's Conference play-off final winners have incentivised fans to purchase tickets for their remaining League Two games with the lure of being able to get in to the Abbey Stadium when Louis van Gaal's men travel south.

The demand has seen the club sell out for the Newport game, meaning Richard Money's side will be backed by a capacity crowd when they face high-flying Newport.

And the prospect of securing a place in the starting line-up for the money-spinning televised match against the 20-time English champions will lend added motivation to the hosts.

Cambridge head into this weekend's game on the back of a 1-0 win at Carlisle United, while Newport boss Justin Edinburgh will be hoping speculation over his future will not affect his side.

Edinburgh was this week linked with the managerial vacancy at League One strugglers Gillingham, but insisted he had not been in contact with the Kent club.

Newport sit third in the table after reeling off four consecutive victories and have won seven of their last eight matches.

Wycombe Wanderers hold a one-point lead over Burton Albion at the top of the table ahead of their trip to Bury.

Gareth Ainsworth's side beat Hartlepool United and York City after a run of three consecutive draws and now face a Bury side smarting from their 1-0 defeat at lowly Dagenham and Redbridge, who now meet Northampton Town.

Burton are not on the heels of the leaders and Jimmy Floyd Hasselbaink's men head to Portsmouth looking for a fourth consecutive win.

A run of three games without a win - or even a goal - has seen Shrewsbury Town drop down to fourth spot and they will see the visit of bottom side Hartlepool as a chance to get back on track.

Hartlepool head to Adams Park buoyed by a 2-0 victory over Cheltenham Town last weekend, which was the first time they have secured all three points for two months.