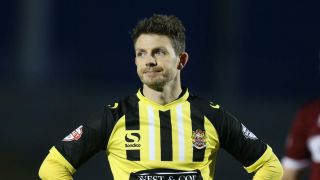 The sides have lost just four times between them since the turn of the year, with Wayne Burnett's men picking up an impressive triumph away at fellow strugglers York City.

Veteran Jamie Cureton rolled back the years for the visitors at Bootham Crescent with a goal in either half to leave York without a victory in the league since late December.

Russ Wilcox's side slipped into the bottom two as a result, while Carlisle moved up the table after Charlie Wyke struck twice against Tranmere Rovers.

The former Middlesbrough striker took his tally to three goals in as many matches since joining in January as Carlisle leapfrogged Tranmere into 18th despite Kyle Dempsey's late dismissal.

Elsewhere at the foot of the third tier, Hartlepool United fell to their 18th league defeat of the season as they were beaten 1-0 by Portsmouth, and Mansfield Town boosted their survival hopes.

Reggie Lambe was the man on target early in the second half against Stevenage to move his side three points clear of the relegation zone.

At the top, Burton Albion and Wycombe Wanderers made the most of Shrewsbury Town's 1-1 draw with Southend United by taking maximum points.

Jimmy Floyd Hasselbaink's men cruised past struggling Cheltenham Town 3-1 to go top thanks to goals from Stuart Beavon, Adam McGurk and Phillip Edwards, while Wycombe brought Cambridge United back down to earth with a 1-0 win at the Abbey Stadium.

After impressing in their FA Cup replay defeat to Premier League side Manchester United, Richard Money's men saw Hogan Ephraim score the winner and Cameron McGeehan get sent off within three second-half minutes.

None of the sides in the play-off spots were able to win as Luton Town were held 1-1 by Oxford United and Bury produced the same scoreline versus Exeter City.

Newport County lost Justin Edinburgh as manager to Gillingham earlier in the day, with the Welsh side suffering a fourth consecutive defeat as they were downed by two Adebayo Akinfenwa goals either side of Kevin Feely's dismissal.

Plymouth Argyle made the most of stumbles above them by beating Accrington Stanley 1-0, while Northampton Town had Marc Richards to thank for their 2-1 win against Morecambe.