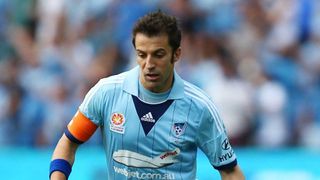 Frank Farina's side had not won a league game since their 2-1 success over Melbourne Heart on December 15, but showed no sign of a lack of confidence by running out easy victors at the Etihad Stadium.

Ranko Despotovic got the rout under way in the 11th minute, before Alessandro Del Piero notched from the penalty spot nine minutes later.

Sebastian Ryall made it 3-0 shortly after, and Juventus and Italy legend Del Piero then scored his seventh A-League goal of the season nine minutes after the restart.

Midfielder Nick Carle rounded the scoring off in the 87th minute to give Sydney their biggest league win since a 7-1 demolition of Wellington Phoenix just over a year ago.

Later on Sunday, their city rivals Western Sydney Wanderers - who had lost their last two matches - closed the gap on table-toppers Brisbane Roar back to five points with a comfortable 3-1 home win over Perth Glory.

Brendon Sentalab broke the deadlock just before the half-hour mark and Aaron Moody doubled the hosts' advantage shortly after.

Shane Smeltz pulled a goal back for Perth early in the second half, but Mark Bridge settled Western Sydney nerves with a penalty 19 minutes from time.