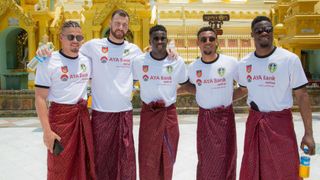 Leeds United commenced their heavily criticised post-season tour of Myanmar with a 2-1 loss to an Myanmar National League All-Star Team on Wednesday.

Uganda international Joseph Mpande and Nigerian striker Christopher Chizoba scored either side of Samuel Saiz's spot-kick as a reported crowd of almost 17,000 watched on at Thuwunna Stadium in Yangon.

The match was played amid a military crackdown in the politically volatile Southeast Asian nation, with Leeds facing a backlash for arranging the two-match visit.

Amnesty International described the move as "odd" and urged the club to help bring to light the plight of the Rohingya population in the northern Rakhine province, where a "textbook example of ethnic cleansing" is taking place, according to the United Nations.

Leeds pressed ahead despite the UK foreign office warning against "all but essential travel" to parts of the country and the decision was defended by owner Andrea Radrizzani.

The tour concludes with a game against the Myanmar national team on Friday.

| The squad arrived landed in Myanmar for this week's , and LUTV went along to find out what they got upto on their first day... May 8, 2018