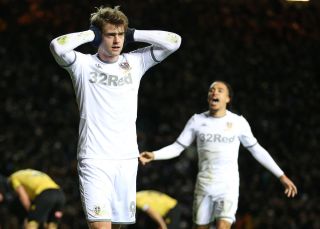 Leeds produced a stunning comeback to seal a 3-2 win over Millwall and reignite their push for automatic promotion.

The Whites were 2-0 down at the break and in danger of seeing the buffer between themselves and the teams in the play-off spots wiped out.

But three goals in 18 second-half minutes saw them seal a precious win – and go top of the table following West Brom’s loss to Cardiff.

United came into this contest in a worrying run of form, having won just once in their last eight games.

In stark contrast the Lions had tasted defeat just once in their previous 13 league outings and began the evening just two points shy of the top six.

Leeds’ start was sluggish and Millwall found themselves a goal up after just four minutes. Shaun Hutchinson was given the freedom of Elland Road from a corner and planted a header beyond home keeper Kiko Casilla.

Mateusz Klich rifled a shot just past a post for Leeds before some great build-up play ended with Patrick Bamford shooting straight at Bartosz Bialkowski in the away goal.

The Polish stopper was being kept busy and had to push away a fierce shot from Stuart Dallas shortly after.

Despite bossing most of the play Leeds somehow found themselves 2-0 down at the midway point in the first half.

The visitors were awarded a penalty after Jon Dadi Bodvarsson was clumsily felled in the box by Gjanni Alioski. There were plenty of Leeds appeals that the ball had gone out of play in the build-up but referee Darren England was not convinced and Jed Wallace rifled the penalty past Casilla to double the visitors’ lead.

The rest of the half saw Leeds push to get on the scoresheet but Millwall’s well-drilled, five-man defence were keeping them at bay.

Leeds finally made the breakthrough barely three minutes after the restart. Bialkowski made a superb point-blank save to keep out Jack Harrison’s effort from a corner but Bamford was there to easily tap in from a yard out to halve the deficit.

Leeds were upping the ante and the pressure eventually told just after the hour when Pablo Hernandez hit a deflected effort which left Bialkowski with no answer.

And the turnaround was complete on 66 minutes when Bamford nodded in unmarked from Luke Ayling’s delightful centre.

It almost got better but Helder Costa saw his curled effort come back off the crossbar and Klich somehow blazed over inside the box with the clock ticking down.

Despite some nervy late moments, Marcelo Bielsa’s side held on for a potentially huge win.