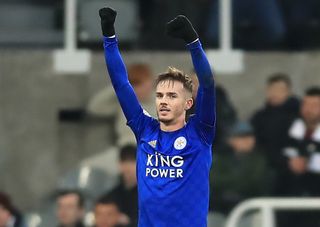 Brendan Rodgers restored six of the nine men he had rested at the weekend and saw the Foxes rip apart a weary Magpies team, who played the final 39 minutes with 10 men after Fabian Schar limped off with all three substitutions already made, on a grim afternoon for the locals among a crowd of 52,178 at St James’ Park.

However, they were indebted to dreadful errors from defender Florian Lejeune which paved the way for Perez’s 36th-minute opener and Maddison’s strike three minutes later before substitute Hamza Choudhury wrapped up the win in style at the death.

In truth, Leicester would have won at even more of a canter had it not been for the efforts of Newcastle keeper Martin Dubravka, who produced a string of fine saves to keep the scoreline just about respectable.

They might have been ahead as early as the third minute when central defender Jonny Evans met Maddison’s corner with a firm header which Dubravka did well to parry before recovering in time to turn away the Northern Ireland international’s follow-up.

The Slovakia international did even better to keep out Youri Tielemans’ skidding 15th-minute drive from the edge of the box with the visitors firmly in control.

However, the home side should have been in front with 25 minutes gone when Jonjo Shelvey played Joelinton in behind the Leicester defence, only for the Brazilian to allow Caglar Soyuncu to get back and disrupt his shot and then clear his header after the ball had come back off keeper Kasper Schmeichel.

It was Leicester who took the lead 12 minutes before the break when Newcastle old boy Perez intercepted Lejeune’s kamikaze cross-field ball and cut inside Schar to fire past Dubravka, despite slipping as he took aim.

Lejeune’s afternoon took a further turn for the worse within three minutes when another poor pass was picked off to allow Maddison to blast a superb left-foot shot high into the top corner and make it 2-0.

It would have been worse for Newcastle had Kelechi Iheanacho managed to get a meaningful touch to Perez’s cross as the half-time whistle approached with the Magpies in complete disarray.

Having already lost wing-backs Jetro Willems and Javier Manquillo and midfielder Shelvey to injury before the restart, Schar succumbed within six minutes to kill any hopes of a fightback.

The home side were simply in containment mode and Dubravka had to pluck a 55th-minute Maddison piledriver out of the air and make another superb double save, this time from Iheanacho and Perez, to prevent further damage.

The game began to resemble a training ground exercise as the home side sat back and attempted to soak up pressure, only to concede once again with three minutes remaining when substitute Choudhury swept home a third off the underside of the crossbar.