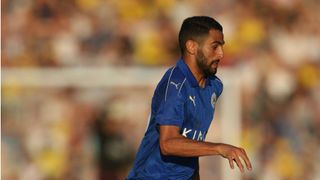 Mahrez has been tipped to follow in the footsteps of N'Golo Kante, rather than Jamie Vardy, and depart the King Power Stadium after last season's thrilling title triumph.

Kante's new club Chelsea, Arsenal and Barcelona have all been linked to Mahrez, who saw Leicester go 1-0 down at the Kassam Stadium as Chris Maguire scored from outside the penalty area.

Demarai Gray equalised before half-time, when Mahrez was one of five players to be withdrawn.

Ron-Robert Zieler and Luis Hernandez made debuts as half-time substitutes, while Ahmed Musa came on in the second period for his bow.

CLAUDIO: "Albrighton and Mendy had little problems tonight. I wanted to leave them out, but maybe they will play at Celtic." July 19, 2016

It was a more familiar face to find the winner though, Jeff Schlupp hitting the target from distance.