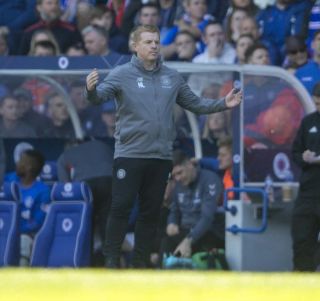 Neil Lennon insists he does not fear Celtic’s lifeless display at Ibrox will cost him his chance of landing the Parkhead job permanently.

The champions had a day to forget against Rangers as they allowed Steven Gerrard’s side to coast to a 2-0 win in the final Old Firm clash of the season.

Goals from James Tavernier and Scott Arfield sent the Light Blue fans into delirium – but the defeat could yet have consequences for Lennon.

The interim Hoops boss is still waiting to learn if he will be kept on beyond this month’s William Hill Scottish Cup final.

The Northern Irishman was tasked with nudging the club’s triple treble push over the line when he was brought back in the wake of Brendan Rodgers’ Leicester switch.

His team have already wrapped up their eighth league title on the spin and can complete an historic third domestic clean sweep when they face Hearts at Hampden on May 25.

Lennon, though, was far from happy with his side’s performance in the fourth derby contest of the campaign, accusing his players of failing to match Gers in the hunger stakes.

But asked if the display might sway the Hoops hierarchy’s decision on whether he stays on after the summer, he replied: “I’ve no idea, I wouldn’t have thought so.

“We have come through a lot of big games recently, meaningful games. I’m not saying this isn’t meaningful, but quarter-finals, semi-finals, league games.

“We got the title won last weekend and have a cup final to look forward to. Then maybe I will know after that.”

Lennon could not hide his disappointment with his side’s performance.

“Poor – very poor,” was his assessment. “Lacked energy and desire. And Lacked quality. The hungrier team won today and that’s the biggest criticism I can lay at the players’ feet.

“We looked flat and like we were just fulfilling the fixture today and that’s obviously not good enough.

“I had to tell the players, whether I’m here or not next year, that performance is just not good enough for a derby.”

Lennon claimed before the game that Rangers had a “huge disciplinary problem” having had 12 players sent-off this year.

And he insisted they should have had another when Jon Flanagan thrust his arm into the face of Scott Brown early in the second half.

The former Hibernian boss said: “It’s a red card. Again. How the referee has not given that as a red card I don’t know. It’s an elbow into his face.”

Rangers got off to a flying start when,  just two minutes in, Tavernier’s free-kick was allowed to drift in at the back post by Scott Bain.

With the Hoops looking out of sorts, Rangers capitalised again after 65 minutes as Arfield pounced to prod home the second after brilliant work by Glen Kamara.

The victory – which cuts Celtic’s lead to six points – counts for little in the larger scheme of things but will renew belief among the blue half of Glasgow that they can finally halt their bitter rivals’ era of domination after the summer.

And Gerrard, whose side have now both of their derby showdowns on home soil, agreed, saying: “We should take a lot of belief and confidence from this performance and this result.

“If you analyse the four derby games I think we’ve been more than a match. That hasn’t been the area where we have fallen short.

“We have drawn too many games elsewhere. There has been one or two disappointing defeats within that as well.

“It is a huge challenge here. Just because we have won today and performed very well it doesn’t make it any easier next season.

“Celtic aren’t going to go away, they’re going to improve. There’s still a target for us which is to try and knock them off their perch.

“As I say, we are very respectful to the challenge and the opposition, but we have to take confidence and belief from games like this.

“At our best we have shown that we can compete and beat them, but we have to do it over a longer period of time. That is a bigger challenge.”