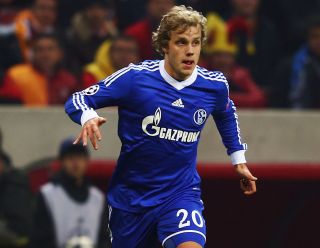 The Scottish champions are searching for reinforcements to their forward line after Hooper departed Celtic Park to join Premier League outfit Norwich City, and Lennon confirmed a bid had been lodged for Pukki's services.

Lennon watched the 23-year-old play for Finland in their 2-0 win over Slovenia on Wednesday.

And the Northern Irishman has identified Pukki as the man he wants to fill the void left by former Scunthorpe United player Hooper, but admitted the German club are not looking to relinquish the striker.

"He's similar to Gary," Lennon said. "He's got that stocky build. He's maybe not as physical as Gary but his movement is excellent and so is his first touch.

"He's a good finisher. I think he'll suit our style of play. I've seen him in the flesh a couple of times.

"We have put a bid in and Schalke have said they're not willing to sell, these are the barriers you come up against now and again.

"He's an impressive player but he's not getting much football at Schalke which might work in our benefit.

"(I saw on Wednesday) just how good his touch is and he's a team player. A lot of things Finland did went through him.

"He created a couple of decent opportunities for himself and this is international - not club level - we're talking about. He came out of it pretty impressively."