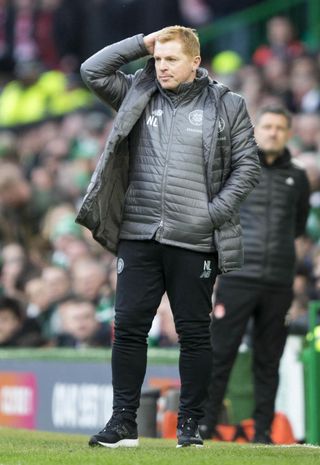 Interim Celtic boss Neil Lennon excused his side’s performance dip after they were held to a goalless draw by Aberdeen in his return to Parkhead.

The former Hoops captain and manager was put in charge of the club until the end of the season last month after the departure of Brendan Rodgers to Leicester, but after wins at Hearts and Hibernian his homecoming was spoiled by an organised and dogged Dons side.

It was the first Ladbrokes Premiership points dropped at home this season, but Celtic returned eight points clear of Rangers at the top of the table and still on course for an eighth successive title and the unprecedented domestic treble treble.

Asked about the performance, the Northern Irishman said: “OK, a little bit flat, a little big leggy, I understand that.

“It is natural. You have that adrenaline rush for a couple of days, there is always going to be a bit of a lull afterwards

“They are human beings, not robots, and I understand that, and I again thanked them for their performance.

“It is more psychological than anything else. They lacked that little bit of pizzazz in the final third.

“But we have had three really difficult games to negotiate in 10 days and we have come out of it unscathed, and we will get them together after a couple of days’ rest and move forward.

“We take a point, we are still unbeaten (domestically) since the turn of the year.

“I would have loved to win the game and be 10 points clear but you can’t have everything and they are giving me everything.

“You have to give Aberdeen credit as well, they are a tough nut to crack sometimes.”

Aberdeen will take massive confidence from their performance as they turn their attention to their William Hill Scottish Cup quarter-final replay against Rangers at Ibrox on Tuesday night.

Boss Derek McInnes claimed the draw was “a fair result”  and will embrace another tough game in Glasgow, where he will be without suspended striker Sam Cosgrove.

The former Rangers midfielder said: “I actually feel that we were quite relaxed coming into the game.

“Before the game everybody speaking about these two games in Glasgow, Celtic Park and Ibrox, and the majority wouldn’t have given us much chance. But we actually see it as brilliant games, magic games to be involved in.

“It is an opportunity. When you come up against Rangers and Celtic, who have far bigger resources, far bigger squads to choose from, sometimes you can be stretched.

“But sometimes you have remind yourself that they are brilliant games for your team.

“We had a lot of young players out there today and there will be even more belief going into the next game, if they needed it.

“We have won in Glasgow plenty recently and the intention is to get the club into a semi-final, as difficult a task as it will be.”