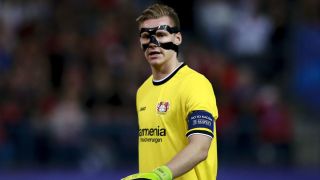 Bayer Leverkusen goalkeeper Bernd Leno dreams of a transfer to Real Madrid as he looks to take the next step in his career.

The 25-year-old has become one of Leverkusen's undisputed star players since joining the club from Stuttgart in 2011 and he was linked with a move to the Santiago Bernabeu earlier this campaign after impressing in the Champions League.

Leno has a contract with his current club until June 2020, but he has acknowledged it would be hard to turn down Madrid if the Spanish champions were to approach him.

"It is now my goal to become one of the best goalkeepers around in Europe," Leno told T-Online.

"We are regularly playing European football with Leverkusen, but it remains my dream to one day play for a major club abroad.

"And Real Madrid are the team I have supported since my childhood."

Leno kept nine clean sheets in 42 appearances in all competitions this term.

He is part of Joachim Low's Germany squad for the Confederations Cup.