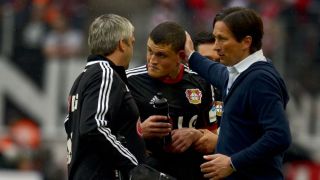 Kyriakos Papadopoulos will miss Bayer Leverkusen's final four Bundesliga matches after it was confirmed he needs surgery on a dislocated shoulder.

The Schalke loanee suffered the injury during Saturday's 1-1 draw in the Rhine derby against Cologne.

Papadopoulos, who needed an operation on a similar injury in November, will now go under the knife on Monday and a recovery time of three months is expected.

It marks a further blow to Leverkusen, who saw midfielder Gonzalo Castro ruled out for the rest of the campaign earlier this week with a knee injury.

Papadopoulos' absence also leaves Leverkusen short of defensive options, after Emir Spahic was sacked by the club earlier this month for head-butting a steward following a penalty shootout defeat against Bayern Munich in the DFB-Pokal.

Roger Schmidt's side are locked in a battle with Borussia Monchengladbach for third place and automatic qualification to the UEFA Champions League.