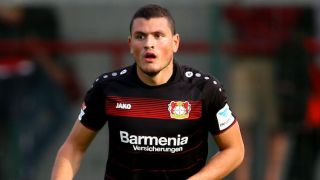 Bayer Leverkusen defender Kyriakos Papadopoulos will spend the rest of the 2016-17 season on loan at RB Leipzig.

Papadopoulos will add Bundesliga experience to the newly promoted club having featured in the top flight 91 times since joining Schalke from Olympiacos in 2010.

The centre-back initially joined Leverkusen on loan for the 2014-15 season before his move was made permanent, but he has been moved on again in a season-long loan deal.

"He's a good winner of the ball, brings a good level of aggression and is also a good communicator. Both Bayer Leverkusen and Kyriakos met our terms financially so that we could make the loan happen," said RB Leipzig sporting director Ralf Rangnick.