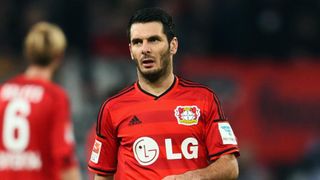 The incident occurred after Leverkusen's DFB-Pokal defeat at home to Bayern Munich last Wednesday. The Bosnia-Herzegovina international was recorded confronting the steward, with police set to investigate.

But Leverkusen have opted to act decisively by sacking the 34-year-old.

"Emir Spahic is an outstanding footballer, [but] the most recent evidence left us with no choice," said managing director Michael Schade.

"After video documents surfaced that shocked and concerned us all we could not wait for the outcome of the legal investigation or possible criminal case.

"We have found an amicable solution, Emir has repented his actions and regrets them very much."

Spahic had made 36 appearances for Leverkusen this season.

"I regret my behaviour after the cup match on Wednesday," he said. "For this behaviour I want to apologise to the victims and their families.

"I know that I have caused great problems for my club. It was a great honour to be part of this team, I wish them all the best for a great future."