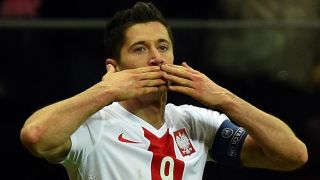 The Poland captain's powerful header just before half-time against Republic of Ireland on Sunday took him to 13 in Group D, level with the former Northern Ireland striker's tally set back in qualification for Euro 2008.

Lewandowski's goal proved decisive in the encounter in Warsaw as Poland went on to secure a 2-1 win and book their place at Euro 2016 in France.

The Bayern Munich star has enjoyed a remarkable run of form so far this season and had scored 14 times in just five appearances for club and country prior to Sunday's final qualifier.