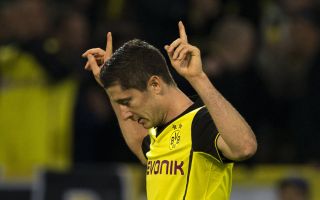 The Borussia Dortmund striker has become one of European football's leading marksmen, and scored 24 goals for Jurgen Klopp's side in the Bundesliga last season.

The 25-year-old has reportedly attracted interest in the past from English top-flight sides Manchester United, Manchester City and Chelsea.

Lewandowski even spoke with retired United manager Alex Ferguson, although he conceded that a transfer was never discussed.

It appeared as though those overtures would be overlooked in favour of a move to German champions Bayern Munich, but Dortmund successfully fended off a move during the transfer window.

Rumours have circulated that Lewandowski was set to sign a pre-contract deal with Bayern in January, with his current contract set to expire in at the end of the season.

But he insisted his future has yet to be decided, and  has set his sights on plying his trade in England in the future.

"It was a misunderstanding. It is true I had an opportunity to speak with Sir Alex Ferguson (last year), but we didn't mention the transfer.

"One day I would like to play in the Premier League. It would be a great experience."

The Poland international also confirmed he could have moved to England three years ago, when Blackburn Rovers made an approach to his former club Lech Poznan.

He added: "There was a proposal from Blackburn. I even spoke with the former manager (Sam Allardyce).

"In the end, I decided that Dortmund gave me a better chance of development as a footballer."

Lewandowski will play at Wembley on Tuesday as Poland face England, with the hosts looking for a win that will secure their spot at the 2014 FIFA World Cup.