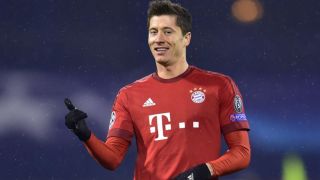 Bayern Munich striker Robert Lewandowski says he may not see out his career with the German champions, acknowledging the possibility of an exit amid links with Real Madrid and Paris Saint-Germain.

The Poland international has been a reported target for both Madrid and PSG in recent weeks following Bayern president Karl-Heinz Rummenigge's admission that Napoli striker Gonzalo Higuain was of interest to them.

Lewandowski's contract runs until 2019 and he will see coach Pep Guardiola depart at the end of the season to be replaced by Carlo Ancelotti.

Asked if he felt he would end his career at Bayern, the 27-year-old told Die Welt am Sonntag: "As a professional footballer, it's hard to say.

"Many times I have heard players say such a thing and then comes another coach and they were no longer in such high demand. Or they got a very interesting offer.

"In any case, I feel very well at Bayern and will always give everything for the team while I'm here. I focus exclusively on Bayern.

"Ever since I was 18, there have been enquiries and rumors and even then I learned to deal with it. I can shut it out, it does not distract me.

"For me, this has become normal. However, it does not interest me."

Guardiola brought Lewandowski to the Allianz Arena in 2014, with the Pole furthering his reputation as one of the best out-and-out strikers in the world.

While the Spaniard's impending exit has fuelled speculation over Lewandowski's future, the former Borussia Dortmund man remains focused on ending the season strongly.

"[Guardiola's exit is] a long way off," he added. "We now all know that Pep leaves the club in the summer but, until then, we are a unit.

"And we want to celebrate another title with him at the end of the season. That's why I concentrate fully on this season.

"Under Pep I always learned something new, especially in terms of tactics."