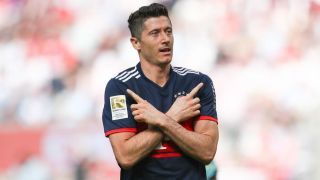 Robert Lewandowski wants to leave Bayern Munich in pursuit of a new challenge, his agent has said.

The Poland international has been heavily linked with Real Madrid for a number of weeks despite an insistence from chairman Karl-Heinze Rummenigge that no negotiations had taken place.

Rummenigge also described the player as "completely loyal" and stated that he expected him to honour his contract, which expires in 2021.

However, Pini Zahavi, who became Lewandowski's representative in February, has confirmed the striker wants a move away from the Allianz Arena.

"Robert feels he needs a change and a new challenge in his career. The Bayern management know about it," Zahavi told Sport Bild.

Zahavi denied there was any one club Lewandowski is keen to join but called on the likes of Rummenigge to respect his desire to further his career.

"Robert's motives are not money or a particular club, because almost all the top clubs would like to have the best striker in the world in their ranks," he said.

"Everyone in Bayern's club management has had a great career of their own. They should understand his situation."

Bayern are thought to be determined not to sell Lewandowski, who has won four consecutive league titles since joining from Borussia Dortmund in 2014.

Lewandowski's future has been under scrutiny ever since Zahavi's appointment, given the Israeli's involvement in brokering Neymar's world-record €222million move to Paris Saint-Germain.

The 29-year-old has been tipped as a replacement for Karim Benzema at Madrid but has also been linked with PSG, Chelsea and Manchester United.

Lewandowski came in for criticism, including from some team-mates, after he refused to acknowledge coach Jupp Heycnkes when he was substituted during the 3-1 win over Cologne this month.

Former coach Ottmar Hitzfeld accused him of being "an egotist", although he claimed it was unlikely Bayern's refusal to sell the player would change following the incident.