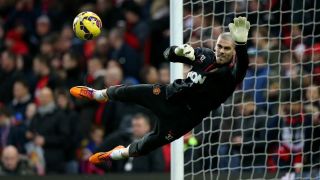 The three-time Champions League winner is expected to join the Belgian outfit in the coming days after a much-publicised falling out with Manchester United manager Louis van Gaal left him frozen out of the team.

However, despite his acclaimed success with Barcelona and Spain, Dossevi has questioned the move, admitting he is unsure whether the transfer is required.

"Personally, I am torn," the 27-year-old told radio station RTL Sports. "He's obviously a very big player, but that is not the position where we necessarily need reinforcements."

"[Current no. 1] Guillaume Hubert is doing well, why do you have to replace him?

"He showed all his qualities in recent weeks. We have the chance to qualify for the final of the Belgian Cup thanks to him."

Hubert has played 11 league games this season and has kept three-straight clean sheets in his last three games in all competitions, most recently in a 2-0 win over Genk in the Belgian Cup semi-final first leg last Wednesday.

Despite that, he would be unlikely to continue as the club's number one keeper should Valdes arrive as predicted.