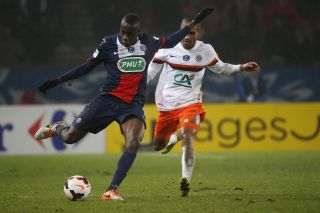 Laurent Blanc's side fell to a shock 2-1 home defeat at the hands of lowly Montpellier in the round of 32 on Wednesday, ending their quest for a trophy they have not won since 2010.

The result was a rare blip for the men from the French capital, who have been largely unbeatable in the league this season, having lost just one Ligue 1 fixture so far and have won four of their last five matches.

PSG won the reverse fixture between these sides 2-0 in August, but will have bad memories of their last trip to Stade du Roudourou, which saw them suffer a 1-0 Coupe de la Ligue defeat in 2010.

But Guingamp have been on a poor run of form of late. One win in their last 10 league matches has seem them dragged ever closer to the relegation zone, although Guingamp still have an eight-point safety cushion.

That poor run almost transferred to the Coupe de France on Tuesday, when Guingamp required extra time to save their blushes and record a 3-2 victory over fourth-tier outfit Concarneau.

Victory for PSG would see them go eight points clear at the top, with Monaco not playing until Sunday, while Guingamp will have closest rivals Nice and Bastia in their sights as they chase an upset.

The hosts could be without the services of Christophe Mandanne, who was withdrawn late on in his side's goalless draw with Saint Etienne, while former PSG midfielder Younousse Sankhare is suspended and will not feature.

Blanc, meanwhile, will be forced to do without Christophe Jallet (back) and Adrien Rabiot (knee) as his side go in search of a 16th league win of the season.