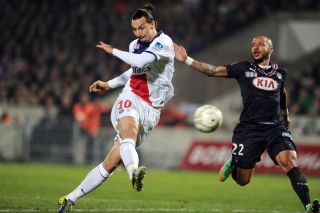 The midfielder became the latest high-profile addition to PSG's star-studded ranks when he completed the formalities of his move from Premier League side Newcastle on Wednesday, for a fee of around £20million, and he could feature for the first time against Francis Gillot's men.

Coach Laurent Blanc has opted to strengthen in the middle of the park after Adrien Rabiot was ruled out for several months with a knee ligament injury.

The addition of Cabaye will undoubtedly provide yet another dimension to PSG's already fearsome attacking threat, with Bordeaux looking to succeed where others have failed already this season by beating the champions on their own patch.

Blanc's men have turned the Parc des Princes into a fortress again this season and are unbeaten in 23 consecutive home league matches.

However, they are winless against Bordeaux on their own turf since 2010 and have tasted victory in just four of the last 10 league meetings between the two sides in Paris.

Blanc can at least point to a decent record against his former club so far this term, with PSG claiming a 3-1 win in the Coupe de la Ligue at the Stade Chaban Delmas earlier this month in addition to earlier triumphs in the league and the Trophee des Champions.

Cabaye's arrival comes at an opportune moment for Blanc, with his options in midfield further depleted by the suspension of Marco Verratti, while Christophe Jallet (knee) is also out with injury alongside Rabiot.

Ezequiel Lavezzi missed the draw with Guingamp last weekend with a groin injury and remains doubtful.

For Bordeaux, striker Cheick Diabate has been battling a knee injury and former PSG forward Guillaume Hoarau is hoping to overcome a thigh problem.

Defender Matthieu Chalme (calf) misses out, while Diego Rolan (hamstring) and Jussie (elbow) are both doubts.

That win moved Gillot's side side into sixth, seven points adrift of third-placed Lille, with the visitors looking to secure a spot in the Champions League for the first time since Blanc guided them to the quarter-finals in 2010.