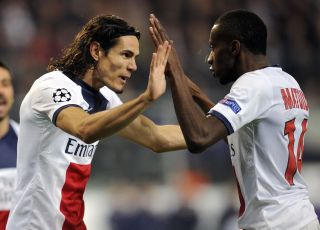 Laurent Blanc's outfit scrambled to a 2-2 draw at a 10-man Saint-Etienne on Sunday, halting a run of four straight victories in Ligue 1.

It could have been worse for PSG, who trailed 2-0 at one stage, but a red card for Fabien Lemoine gave them an opening.

Despite the small blip PSG remain on top of the league, with 25 points from their 11 Ligue 1 fixtures enough to see them goal difference ahead of newly promoted Monaco.

Blanc has been boosted by the return to training of full-back Christophe Jallet and midfielder Javier Pastore, who were struggling with calf and thigh problems.

Friday's fixture may come too soon for the duo to return, while captain and centre-back Thiago Silva is also ruled out.

Silva suffered a hamstring injury against Monaco and although he has returned to training, Blanc said they must be careful with the 29-year-old.

"Physically he (Thiago) has done a great job. We're on time (with his recovery)," he said.

"But we cannot afford a relapse, either for himself, for the club or the Brazilian team. It is good but we have to be careful."

Lorient have made a poor start to their season and sit 17th having taken just 10 points from 11 league fixtures.

They head into the match on the back of a 2-0 defeat away at Nantes in the Coupe de la Ligue but posted a 2-1 win over fellow strugglers Sochaux in their last league fixture.

That win ended a run of six games in a row without a win, of which five were defeats, while Lorient's recent record against PSG has not been great.

Christian Gourcuff's men have failed to beat PSG in their last three meetings, but their last victory did come in Paris, as Julien Quercia's goal gave them a 1-0 win in August 2011.