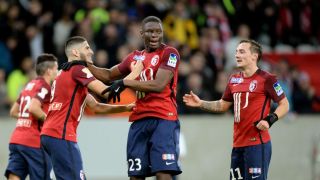 Lille reached the final of the Coupe de la Ligue for the first time as they beat Bordeaux 5-1 on Tuesday to end their recent run of poor form.

Frederic Antonetti's side got themselves off to a superb start as Benzia opened the scoring inside the first 10 minutes with his first of the competition.

Bordeaux were briefly level through Clement Chantome before a Sane own goal and Soumaoro gave Lille a two-goal advantage at the break.

The impressive Bautheac added a fourth just before the hour with an audacious flick from Sebastien Corchia's right-wing cross.

Bordeaux were unable to come back from three goals behind as Lille - who added a late fifth through Boufal - comfortably held on to reach the final, where they will meet either Paris Saint-Germain or Toulouse.

Despite being without a win from their last three matches in all competitions Lille - who were knocked out of the Coupe de France by fourth tier Trelissac last week - started well and were ahead after seven minutes.

Bordeaux goalkeeper Jerome Prior and defender Diego Contento got into a terrible mix-up as a Bautheac cross came in from the left, the pair colliding to present the ball to Benzia, who slotted it home.

The ball was back in the Bordeaux net midway through the half as Djibril Sidibe fired home from close range, but his effort was ruled out for offside and Lille were soon made to pay.

Soumaoro tried to be too clever inside his own penalty area as he turned away from Diego Rolan, evading the Uruguayan but failing to hold onto possession, gifting Chantome the equaliser.

Lille were back in front prior to the break, though, as they finished with a flourish.

After Ludovic Sane had inadvertently lobbed his own goalkeeper to hand Lille the lead, the hosts made it 3-1 as Soumaoro made amends with a close-range finish from Renato Civelli's knock-down.

Early Bordeaux pressure after the restart failed to bring a chance of note for the visitors, and Lille quickly showed them how it should be done as Bautheac executed a superb flicked effort that flew beyond Prior after 55 minutes.

With their progression seemingly secure Lille took the pace out of the game in the closing half hour, sitting deep to deny Bordeaux any room and defending resolutely as the visitors desperately tried to find a way back in.

They were unable to do so, though, and Lille wrapped up their victory as Boufal completed a swift counterattack with a deft lob to make it five and keep their European qualification hopes alive.