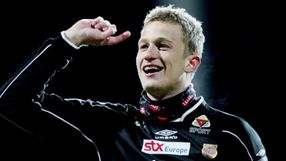 The Red Devils have long been linked with the Danish international shot-stopper, with Sir Alex Ferguson searching for a successor to Edwin van der Sar, who is expected to leave Old Trafford at the end of the current campaign.

Lindegaard, 26, has made more than 70 league appearances for Aalesund since arriving - initially on loan - in 2009, and has been dubbed as the 'next Peter Schmeichel' in his homeland.

He could now be set to follow in the great Dane's footsteps in January by joining United, who are believed to have opened talks over the capture of the keeper.

"Henrik and I are in place in Manchester," Aalesund chairman Bjarne Haagensen told TV2.

Asked if a deal was close, he said: "It is. We are in the middle of it. I can't say more right now. We will send a press release in three or four hours."

Lindegaard kept a clean sheet in Denmark's 0-0 draw against Czech Republic in midweek, but would not be drawn on reports claiming a deal to take him to Old Trafford was imminent.

"I have only heard the rumours about United, I have absolutely no comment," he told told VG.

He had earlier intimated, however, that it was his desire to move on in January.

"I don't know if I have played my last match for Aalesund," he told Sporten.dk.

"My plan is to move on now. You have got to be a very good goalkeeper to get sold these days."