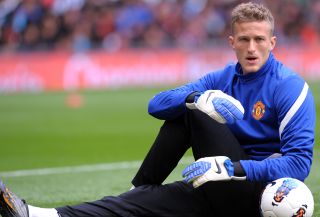 The Denmark international was making only his second appearance of the season, but even though the January transfer window is open, the 29-year-old is happy at his boyhood club.

"If I see it through my own eyes I would say 'Jesus Christ I am not playing, why is that', then it would be easy to get frustrated," Lindegaard said.

"I have to try and be objective, and raise myself up above just myself and see it from the club's perspective and how much pressure we have been under.

"Then it is easier for me to understand why things are the way they are. For me it is all about being a happy human being. I am now at Manchester United. It is my club since I was a small kid. This is my dream.

"The question is do I have to compromise that dream and seek elsewhere. Right now the decision is to stay here and help the club. That is the most important thing.

"If I was sitting watching the games on the couch I would be very disappointed. That is how it is. It is both a praise and a curse.

"You have to remember how lucky you are. How many football players can say they are part of their biggest dream?

"I am not stupid. I can see I could use some more games somewhere but right now I am helping this club as much as I can."

Despite United's disappointing start to the season – which sees them seventh in the table – Lindegaard sressed that they must continue to target the Premier League title.

"Look at the history of this club. It is the most successful club in English football. That is not going to change. It is how it is. It is in the genes of the club and is going to continue.

"We are in the middle of the transition. I am sure when the transition is fulfilled we will be as successful as we have ever been."