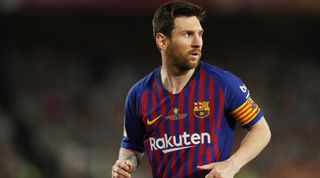 Reports emerged last week revealing that a clause exists in Messi’s current deal that would allow him to leave on a free transfer next summer, despite his contract running until 2021.

However, the La Liga champions remain relaxed about the situation and are confident of keeping their most prized asset in Catalonia, according to El Mundo Deportivo.

Barcelona are preparing a new contract for the 32-year-old with no end date, which would keep Messi at the club for life.

There is no immediate hurry to get the deal signed as the club have no concerns about the forward’s loyalty or commitment.

Messi is understood to want to keep playing until at least 2022, so he can travel to the World Cup in Qatar with Argentina.

The prospect of a return to his boyhood club Newell’s Old Boys at the end of his career has been touted, as well as a move to MLS, and Barcelona would happily allow one their all-time greats to pursue these adventures before returning to fill a new position off the pitch.