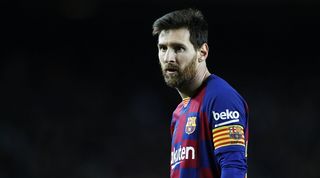 Barcelona are beginning to fear for Lionel Messi's future after the club captain publicly hit back at sporting director Eric Abidal.

The Spanish champions sacked Ernesto Valverde following a 3-2 defeat by Atletico Madrid in the semi-finals of the Spanish Super Cup last month.

The Blaugrana were top of La Liga when the former Athletic Club head coach was dismissed, but they are now three points adrift of Real Madrid.

In a recent interview with Sport, Abidal appeared to blame the Barcelona squad for Valverde's sacking.

"A lot of players were not happy and did not work much and there was also a problem with internal communication," the Frenchman, who used to play alongside Messi at the Camp Nou.

"The relationship between the coach and dressing room was always good, but there are things that as an ex-player I can sense. I told the club what I thought and we had to make a decision."

However, Messi has hit back at Abidal, fuelling speculation that he could seek pastures new at the end of the season.

A clause in the Argentinian's contract would allow him to walk away for free in the summer.

"I honestly do not like to do this kind of thing but I think that everyone has to be responsible for their job and take responsibility for their decisions," the Messi wrote on Instagram.

"Players are responsible for what happens on the field, we are also the first to acknowledge when we don't play well.

"Those in charge of sporting direction should also face up to their responsibilities and above all take charge of their own decisions.

"Lastly, I think that when you talk about players, you should give names because otherwise you are tainting everyone's name and feeding rumours that spread and are not true."