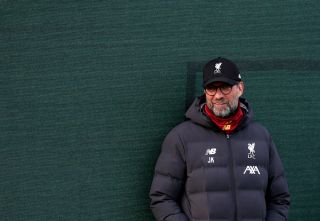 The holders return to the scene of last June’s final victory over Tottenham on Tuesday as they face Atletico Madrid in the first leg of their last-16 tie at the Wanda Metropolitano.

The Reds are already well on course to win the Premier League title, as they lead the table by 25 points, and manager Klopp has his eye on further glory in this year’s showpiece in Istanbul.

He said: “We don’t feel like the winners of last year’s tournament, we feel like contenders for this year’s, and we want to show that.

“We want to be there in Istanbul if possible, and for that we know we have to work our socks off.”

Klopp feels he has his work cut out against Atletico who, despite a difficult season in LaLiga, retain the toughness of their manager Diego Simeone.

Atletico are currently fourth after winning just one of their last five games but Klopp is full of admiration for Simeone, who has twice guided his side to the final.

Klopp said: “Playing Atletico I would say is one of the most difficult things in the life of a football player.

“They are really well organised – a results machine, squeezing results pretty much out of each game if possible.

“Yes, people will tell me that this year is not like it was, but it’s a transition period. They are still fighting with all they have, you don’t get many chances.

“If there’s one team where you have to be at your absolute best, it’s Atletico. They give you absolutely no presents. If you work as hard as possible, you have a chance. If you don’t do that, you have no chance.

“The moment you are not 100 per cent concentrated, they close you down with two or three players and then counter-attack.

“If you are not focused and concentrated in your own offensive play, you will not even have a shot on target because they close the centre so good.”

Despite that, Klopp is proud of his own team and, given their record this season, was equally willing to talk them up at his pre-match press conference.

He said: “On the other hand I don’t think they’ve played against a team like us, and we should not forget that.

“We combine a few things, we are not badly organised, we play football, we have different aspects of the game, our readiness to fight is exceptional.”

Klopp is known for his animation and exuberant celebrations on the touchline but he claims he cannot compare to Simeone, who had two spells with Atletico as a player.

The German said of the Argentinian: “People say I’m emotional on the touchline, but if I’m level four then Diego is level 12. I’m the kindergarten cop compared to him!”

Defender Trent Alexander-Arnold is also determined to ensure the trip to the Wanda Metropolitano is not just a stroll down memory lane.

The right-back said: “It holds good memories for us, it’s where a lot of our dreams came true here, but we don’t focus too much on the past. Our aim is to give us a chance to keep going in this competition.”