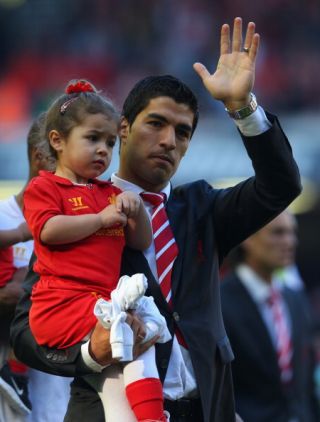 Having scored 23 Premier League goals last season, Suarez has been linked with a move away from Anfield in the transfer window after Liverpool failed to qualify for European competition.

Real and Arsenal reportedly lead the race for his signature, with the London side having already had one bid knocked back.

Rodgers puts the striker in the same bracket as his Uruguay team-mate Edinson Cavani, who recently moved to Paris Saint-Germain for £55million. But the Liverpool boss admits that even an offer of that magnitude would not force him to sell.

"When you consider that Cavani has gone for £55million you know... Luis is up there in that bracket of top talent," Rodgers told the Liverpool Echo.

"Obviously it was an offer (from Arsenal) we didn't deem worthy of the talent and even if they came back with that kind of amount (£55million) there's no guarantee he would be sold even for that because we are trying to build something here."

While away on international duty at the FIFA Confederations Cup, Suarez was vocal in his desire to leave Anfield but Rodgers has made it clear to the 26-year-old that the club will not be held to ransom.

"We are totally in control of the situation, it is one where we don't have to sell," he added. "He has got three years left on his contract.

"We are prepared to get some players in and spend money without having to sell Luis Suarez."